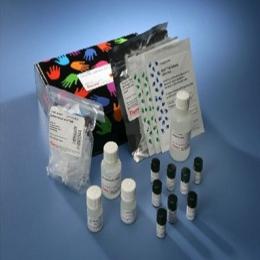 Storage Instruction:Store the kit at 4°C.
Description:
Serum amyloid A (SAA) proteins are a family of apolipoproteins found predominantly associated with high-density lipoprotein (HDL) in plasma, with different isoforms being unequally expressed constitutively and in response to inflammatory stimuli. SAA is known best for its role during the acute phase response to an inflammatory stimulus such as infection, tissue injury, and trauma. During active inflammation the concentration of SAA in plasma can increase up to 1,000-fold within 24 h. It is believed that persistently high levels of SAA during chronic inflammation may contribute to the occasional development of the potentially fatal disease reactive amyloidosis (amyloid A (AA) amyloidosis). In AA amyloidosis, AA, an N-terminal (1-76) fragment of SAA, frequently is found to form amyloid deposits in the liver, kidney, and spleen. However, the presence, in vivo, of full-length SAA in amyloid deposits and the ability of various SAA isoforms to form fibrils in vitro suggest that proteolytic cleavage may not be a prerequisite for AA deposition but rather a postdeposition event.